Samantha has had very positive feedback from a client’s staff member who found herself in a threatening and potentially dangerous situation while working alone. Samantha tells us what happened:

‘I remember speaking to the staff member who was trying to tell me that the customer wanted money from her. All the time the staff member was talking, the customer kept shouting that he wanted the money he had won. But it was after 10 pm, so the staff couldn’t make a payout, and the man had lost all his money and wanted to be refunded. He was shouting at her to give him his money and getting very aggressive.

I was watching him on CCTV and, due to his aggressive manner, I contacted the police straight away as he was becoming more agitated. I continued to advise the employee that I was passing all information on to police.

The man continued to be aggressive and I had to keep warning him, through the two-way communication, to step away from the counter and stop putting his arms through the space.

The police told me they would attend on an immediate response due to the staff member being a lone worker and the customer being so aggressive. I reassured the woman employee that I had CCTV open and would continue to monitor her until police arrived, which I did.

I got feedback too, which was very nice, and made me feel like I do make a difference to how people feel when they are in a confrontational situation.

And here’s how, after the incident, the employee told us that Samantha and StaffSafe®

had made a real difference: ‘a million thank yous for watching over me in what was a very strange situation to what I’m used to in my normal shop. Even though I was well out of my

comfort zone, I felt safe and calm so thank you beyond words’.

Samantha tells us more about her role

Anti-Social behaviour is on the increase, as well as more serious incidents, and my role is continually developing with the times as we bring in more and more equipment and technology, covering more clients visually as well as audibly, which helps the clients and us to deal with whatever situation may be occurring.

The duties of the day vary depending on what shift you are on. During the day, we can be dealing with antisocial behaviour, shoplifters, assaults or even armed robberies. As well as dealing with our calls, we will be assisting engineers through the system as they install new units or repair already installed units. During the night we can be dealing with break ins, fights or, through the use of CCTV and audio, checking that authorised personnel are on site (cleaners and delivery drivers). Day and night, we continue to train newer members of staff and complete any admin that may need updating.

I enjoy the variety of my job. One minute you can be taking test calls from staff and the next minute you can be dealing with a serious Incident where we use our experience in offering support and reassurance. No two days are the same in the job and you can never predict what kind of shift you are going to have.

The nature of calls have changed drastically since I started five years ago. Break ins were not very common but have become a weekly occurrence with some stores being on high alert. Armed robberies have become more violent and more frequent. There is more antisocial behaviour as youths hang around in large groups which can be intimidating to others. And Lone workers can find themselves in very vulnerable situations these days.

Congratulations Samantha on being named StaffSafe Hero of the Month. 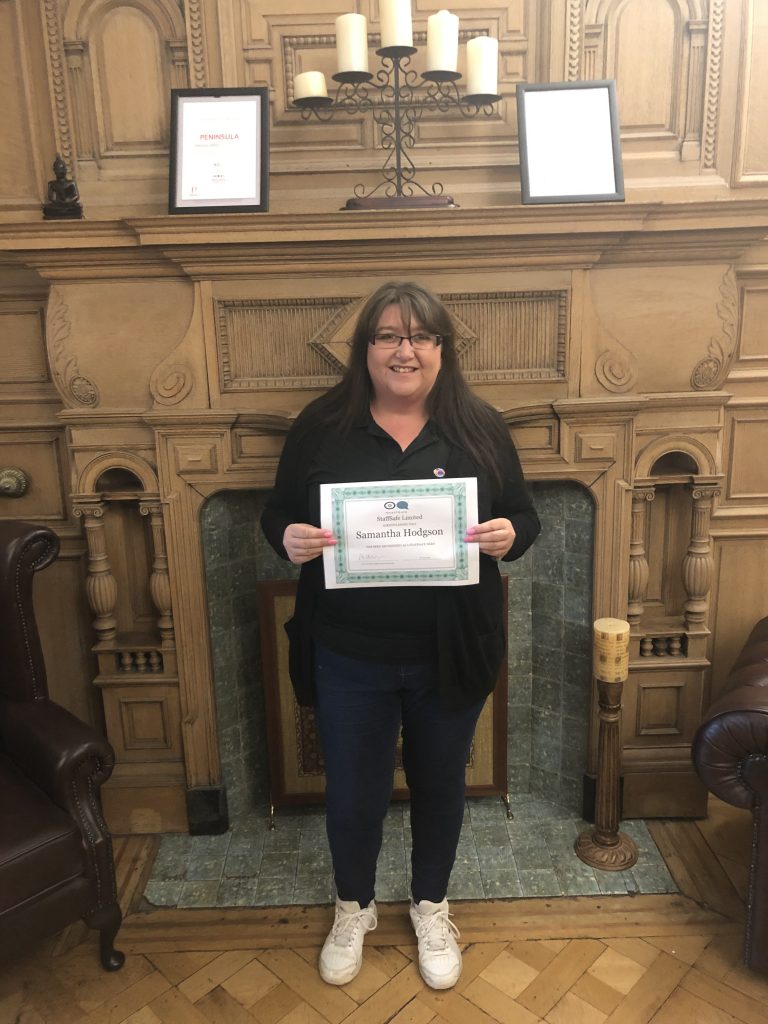